Amos 7: Showdown Between Priest and Prophet 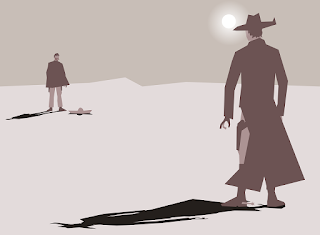 The Book of Amos mostly consists of prophecies, visions, and interactions between the Divine and the Prophet. However, in the seventh chapter, we come across a brief narrative conversation between Amos and Amaziah. Amos is a prophet from the Southern Kingdom of Judah, wherein the First Temple still stands proud; he has been sent by the Divine on a prophetic mission to the Northern Kingdom of Israel, in which there are two centres of religious worship: the temple of Dan and the temple of Bethel, both containing golden calves. The second character of this brief narrative is Amaziah, the priest of the temple in Bethel. Two religious leaders stand in opposition to one another.

The narrative begins with Amaziah sending a message to King Jeroboam II of Israel, warning the king that Amos’s critical prophecies are difficult for the people to hear, because Amos is prophesying about the death of the king and the upcoming exile. Amaziah then turns to Amos and tells him to flee, to return to the Land of Judah, and to ‘eat bread and prophesy there’ (7:12). Amos responds directly to Amaziah’s assumption that Amos is earning his living through prophesying, by stating (7:14): ‘I am not a prophet, and I am not the son of a prophet. I am a cattle breeder and a tender of sycamore figs.’

In this wonderful and strange statement, Amos highlights the assumptions that Amaziah the priest makes about religious leadership. Amos is not a prophet, nor the disciple of a prophet, by trade or profession. He is not earning his bread by offering comforting prophecies, like the professional prophets of the Northern Kingdom. Instead, Amos’s livelihood and training are in animal and plant care. And while this might read to our modern eyes as a humble profession, in the world of Amos and Amaziah, the implication would have been the opposite: Amos was a relatively wealthy man. He was not in need of prophesying to earn his bread; on the contrary, he left a comfortable existence behind him in order to prophesy. And Amos, unlike Amaziah, earns no friends on the political front in his prophesying.

Amos and Amaziah are, in some ways, opposites. Amaziah leads an idolatrous cult, has political capital, and is so entrenched in the idea that religious leadership is about wealth that he cannot imagine that not all prophets are professionals. Amos left a life of wealth and comfort behind him in order to make enemies in the Northern Kingdom by prophesying against the king, and he earns no money doing it. And yet somehow, the tender of sycamore figs has struck fear into the heart of the wealthy priest.