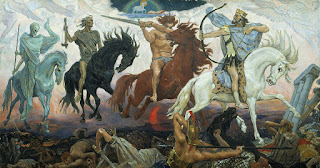 This piece first appeared in Rabbi Natasha's commentary on the 929 Tanakh project here.

Micah is a master of imagery. When God approaches us for judgment, the mountains will melt like wax and the valleys will burst open (1:4). The corrupt rulers of Israel have devoured the people’s flesh and picked the meat from their bones (3:3). In the fourth and fifth chapters of the Book of Micah, the text turns to the question of the future redemption, and Micah paints a series of portraits of hope.

These visions differ significantly in tone and content. They become a swirl of messianic ideas, tilting from universal to particular, from comforting to concerning and back again. One of the most significant differences is the place of the nations. Will the nations be joining us in Jerusalem to worship the Universal Divine in a time of peace (4:1-5), or will the nations attack Jacob and be consequently crushed by Jacob’s God (5:6-14)? Micah does not resolve this apparent contradiction, nor does he seem to see an issue with presenting these diverse images of the future.

Perhaps these visions differ so significantly because we are witnessing the birth and development of the messianic idea. The early messianic texts seem interwoven with the promise to return from the first exile and rebuild the Temple. These concepts are so connected that it is often difficult to tell whether the prophets are talking about the return from Babylon or the eschatological vision. To an eye with a historical lens, it seems that the messianic hope - the eschatological return - grows out of the more pressing question of returning from the Babylonian Exile. In that case, what we are witnessing in the texts of the literary prophets is the birth of the messianic ideal.

This might help us to understand Micah’s colourful tapestry of visions of redemption. Micah’s visions might not be intended to be understood narrowly and literally, but instead as explorations of the messianic concept. In order to accept this, we must think of prophecy as something that unfolds and develops. However, Micah also teaches us an important lesson: we do not need the specificity of eschatological details in order to believe that redemption will occur, and that God is good.