On Moses and Maslow - Parashat Eikev 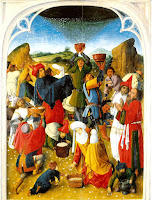 My favourite bakery in Los Angeles was a French bakery across the road from my apartment. It had a certain quirk that always made me smile. Somewhere on the display shelves of challah on a Friday, there could always be spotted a Chumash. This was, of course, a nod to a classic rabbinic text, from Pirkei Avot, which says the following: Ein Lechem, Ein Torah; Ein Torah, Ein Lechem. If there’s no bread, there’s no Torah; if there’s no Torah, there’s no bread.

I’ve been thinking about that bakery this week as we come to a rather famous quote in the Book of Deuteronomy. We read just a few moments ago as Moses reminded us of our travels in the Wilderness. While we wandered, we were fed with manna from heaven, which was to be collected every day. And Moses tells us in this week’s Torah portion that the purpose of the manna was to teach us: ‘כִּ֠י לֹ֣א עַל־הַלֶּ֤חֶם לְבַדּוֹ֙ יִחְיֶ֣ה הָֽאָדָ֔ם’ - that man does not live on bread alone. Bread is not enough.

I suspect that Moses might be having some interesting conversations in Olam Haba, in the world to come, with Abraham Maslow. Maslow penned the famous concept referred to as ‘Maslow’s Hierarchy of Needs’. The Hierarchy of Needs is usually displayed as a pyramid. A person needs to fulfil each layer of the pyramid to be motivated to reach the section above it. At the bottom are physiological needs - things like water and, yes, bread. Once those needs are met, we move up to safety needs: do I have a roof over my head. Once those needs are met, we move up to love and belonging. Then esteem, and finally: self-actualisation. Later in life, Maslow decided that he was not a fan of ‘self-actualisation’ and instead thought that the top of the pyramid should be ‘transcendance’. According to Maslow, we are all yearning to get up that pyramid, but we can’t focus on the next stage up until our needs are met. When we’re insecure about food, we just can’t experience the proper motivation for self-actualisation - according to Maslow.

Man does not live by bread alone. Yes, I can imagine Maslow replying to Moses; man requires much more than bread to reach relational and spiritual goals. But ‘ein lechem, ein Torah’ - okay, he might not have used that precise language, but he was a good Jewish boy. The point is this: if there isn’t bread, there isn’t Torah.

I’ll admit that I’ve never been fully convinced by the hierarchy. It’s a great model for talking about how our motivations work, but it sometimes gets twisted into this idea that people don’t care about love and relationships if they’re worried about food. Taken too far, it might imply that people can either be impoverished or spiritual, but never both.

And how does manna teach us this? We were given this miraculous food, but told only to gather enough for each day, and no more. There was no ‘backup’ manna. Anything extra that was collected would go bad. The manna, then, is an incredible symbol of resilience and recognition of life’s fragility. The people had to learn to live a day at a time.

I am stuck with this image this year about the uncertainty that we live with. Many of us are consumed with thoughts of tomorrow, and for good reason: we do not feel secure. We might sometimes feel that we are at the bottom of Maslow’s pyramid. And of course, this is also true of our ancestors in the wilderness. Without the luxury of land, without permanent homes, the near future must have consumed their thoughts. Will there be bread tomorrow? However, with this act of relying on the manna on a day-to-day basis, the Holy One taught them that awareness of fragility does not have to result only in fear. It can also result in gratitude. Being grateful for what we have today - the metaphorical manna in our hands - is a powerful religious act.

It’s also a difficult one. It takes practice. The manna symbol did not only happen once; it occurred daily. Each day, being grateful for the manna in their hands built up the practice of gratitude for our ancestors. It linked the experiences of physiological needs to high up on Maslow’s pyramid. If ‘Torah’ is high on Maslow’s hierarchy, then this concept says: ein lechem, ein Torah - where there’s no bread, there’s no Torah, yes, but also: ein Torah, ein lechem: where there’s no Torah, there’s no bread.

May we learn from the experiences of our ancestors, and learn to hold today’s manna with gratitude, resilience, and peace.