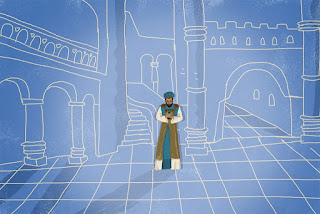 This chapter details another of Zechariah’s visions. It is possible to read Zechariah’s dreams as numbering eight distinct visions, forming a chiastic structure (in which the pattern reflects back on itself, e.g. ‘A B B A’). Reading Zechariah’s visions as a chiasm gives us this:

This structure is of particular interest now for two reasons. First, in a chiastic structure, it is often the middle of the chiasm that is considered the highlighted section. For our purposes, this is chapters three and four. Second, it implies a relationship between this chapter and the next.

Our vision of the heavenly court features the character of Joshua, who is to be the High Priest in the newly-built Temple. The charge is aimed toward Joshua, whose role is paramount in the era to come, and the chapter is completed with a message of future peace and serenity. Similarly, the vision of the menorah in chapter 4 will be focused on the character of the governor Zerubbavel, and it too comes with a deeply messianic undertone. The implication of placing these visions at the centre of the chiasm is that Zechariah’s underlying message is one of hope of future restoration.

The vision of this chapter brings us to a significant moment in return from exile. The Israelites are ready to resume service in the rebuilt Temple. The prophet describes a vision of a heavenly scene in which the angels are arguing about the next High Priest. Standing as Joshua’s accuser is Satan. Another angel stands at Joshua’s defence. Joshua is clothed in filthy garments. Satan argues that Joshua is unfit to serve as High Priest, because he is covered in sin (represented by the filthy garments). In response to this argument, the Divine says: ‘Is this one not a brand plucked from fire?’ Joshua, the Divine seems to be arguing, was brought here out of Babylonian exile, a place of oppression and abuse. The angels then help Joshua to change into clean clothing, and the Holy One tells Joshua that if he follows in God’s ways, Joshua will be able to serve in the Temple.

This is a fascinating scene to serve as a centrepoint for Zechariah’s visions, folded between stories of exile and doom. Joshua wears the worst of Israelite society, the elements which deem us unworthy of redemption. However, Joshua is defended, and is able to move on from the wrongdoings that had previously trapped him. Hope is not gone, the story reminds us: we can shed the filthy garments. Hope is not gone, the structure reminds us: our ability to move on is literally and theologically central.