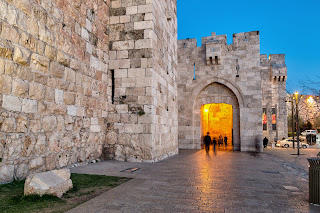 A few days ago, I asked Phin - whose Bar Mitzvah we’re celebrating today - about the difference between twelve and thirteen. I was thinking at the time about the process of becoming Bar Mitzvah, and of becoming a teenager. But there’s actually another difference between the numbers ‘twelve’ and ‘thirteen’ that I’ve stumbled upon this week. This week’s Haftarah is from the Book of Ezekiel, in the midst of his description of the future Temple. Ezekiel has an eye for detail, and he describes this future Temple down to the most particular elements. And one thing that Ezekiel is very specific about, a little later than our Haftarah today, is the number of gates in Jerusalem. The number of gates to enter and exit from this new temple, according to the Prophet Ezekiel, will be twelve. Twelve gates, Ezekiel explains, for twelve tribes. Each tribe has its own gate for entering into the Temple.

Believe it or not, I’m not the first mathematical genius to spot the difference between Ezekiel’s twelve gates to the Future Temple and the thirteen gates to the Temple of the past. The Ari, the founder of Lurianic Kabbalah, wove together a beautiful metaphor with gates of the Temple and gates of prayer, and concluded that this mysterious thirteenth gate represents the attribute of mercy. In terms of prayer, this is the gate for those who don’t know how or where to enter. For the person who has not inherited a tribal or family custom, who does not know which tribal gate to enter, who requires some other way to enter into the realm of the Divine.

It’s a lovely teaching. It answers the question of “why a thirteenth gate” beautifully. And, of course, it leaves us instead with the opposite issue: Why does Ezekiel’s Temple have no thirteenth gate?

We’ll return to that question in just a moment. But first, I want to turn to our parashah. Late in this week’s Torah portion, we come to the tragic story of the blasphemer. The story in the Torah is light on details. Here’s what we know  (Leviticus 24:10): There is a man whose mother was an Israelite and whose father was an Egyptian. A fight broke out between him and another Israelite. As a result, this man then pronounced the Holy Name of God in blasphemy. Not knowing what to do in this scenario, Moses turned to God for a ruling, and was told that this was a crime punishable by death.

As I mentioned, the story is light on details. We don’t know what the argument was about, or why it would lead this particular man to blasphemy - something which he presumably knows is considered a very serious crime. But the midrashic tradition does tackle these questions. The rabbis specifically pick up on how the story is introduced in the Torah: וַיֵּצֵא֙ בֶּן־אִשָּׁ֣ה יִשְׂרְאֵלִ֔ית וְהוּא֙ בֶּן־אִ֣ישׁ מִצְרִ֔י - vayeitzei - and he/it came out, a son of an Israelite woman and an Egyptian man, in the midst of the Children of Israel. ‘And he/it came out’ is a strange verb to begin this narrative with. What ‘came out’, and where from? In order to explain this strange beginning, they tell the following story:

Before the narrative begins in the Torah, they say, this man brought a case before the court of Moses. The case he brought was this: although his father was an Egyptian, this man had gone to pitch his tent in the camp of the tribe of Dan, which was his mother’s tribe. The men of Dan questioned why he was there, to which he responded: “I am one of the children of the tribe of Dan.” But the other men of Dan responded by quoting the rule that people are to camp according to their father’s tribe, not according to their mother’s tribe. There’s our argument. The man then took this case to the court of Moses. But Moses and the Israelite leadership ruled in favour of the men of Dan who had rejected him. What ‘came out’ was the ruling from Moses. And that, according to the midrashic reading of this text (Sifra Emor), is when the man stood up and pronounced the blasphemy for which he would then be put to death.

It’s already a tragic story as it appears in the Torah. But the rabbis deepen that tragedy. The problem was not only a moment of blasphemy - the problem was much deeper and more insidious than that. The problem was that the system did not know how to hold those for whom tribal identity was not simple. As we will see again later with the daughters of Tzelaphchad, the women who will challenge the patriarchal system because it does not account for them, this first draft of Israelite society in the wilderness had no safety net for complexity. There was nothing in place for this man who wished to camp with his mother’s tribe. Ultimately, according to the midrash, this is not just a failure of the blasphemer. Rather, it was a failure of a society   to handle and hold and love and make space for people in situations that are not simple.

What this unnamed man needed… was that thirteenth gate that the Ari described. The place for entering into the people, the covenant, the relationship with the Divine that was denied to him… this was, according to the Ari, written into the later draft of Israelite society, once we moved from the wilderness to the Holy Land. Perhaps the steady ground of being a people with a land and a stationary Temple pushed us to being able to build that thirteenth gate.

But we are still left with the question of why Ezekiel’s future Temple will only have twelve gates. This, I think, is the foundational difference between prophets and rabbis. Ezekiel’s eye was on a redemptive future, a hope for a fixed world - Ezekiel’s Temple exists in a world in which everyone knows her gate, and nobody is rejected from entering. But that’s not the world of the rabbis. The world of the rabbis is the world in which we live, and we live in a world of complexity. We live in a world of intersecting identities, sometimes in ways which leave us feeling that we are on the outside of something. The Ari knew that. The architecture of the Temple of our past reflected that.

Phin. In just a moment, you are going to be called up to the Torah as an adult at thirteen years of age. And I think you and I both know what it means to walk in a messy and complex world, to have international culture-crossing families and friends and loved ones - and also, I think you and I both know the importance of pitching our tents in our tribes and belonging there. Many of us in this room are intimately familiar with these experiences. My hope for you - and indeed for all of us - is to also be people who live on solid enough ground that we feel able to build that thirteenth gate. That we can be secure enough to welcome complexity. That we can know our own personhood and identity well enough that we invite challenge and rise to it.