A Tale of (More Than) Two Cities 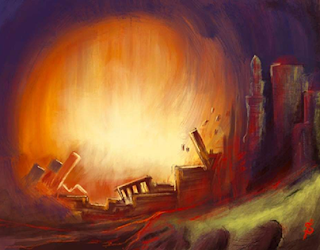 A Tale of (More Than) Two Cities
There is an ongoing joke about the British that football is our religion. I happen to be a football atheist; I don't spend much time thinking about football or its value. However, we seem to be discovering in recent years that this parallel unfortunately extends to some of the less savoury elements of religion, too - such as the overlooking of abuse when it threatens to topple organisations and authorities.
I am thinking, of course, of a building project. I am thinking of a society rife with abuses of human rights, where individuality and expression are punished financially and violently, whose streets I would personally be afraid to walk.
Actually, I am thinking of two societies.

One is Qatar, where the World Cup is due to begin tomorrow, drawing over a million international visitors. Where migrant workers have been building the infrastructure, under conditions described as slavery, with a truly shocking death toll in the thousands. Where homosexuality is illegal and punishable by imprisonment under the law, and it is also reported that such detentions result in severe beatings, and conversion therapy and forced opposite-sex marriage are requirements of release. Where women have male chaperones to make basic decisions about their lives; where they have no access to basic reproductive and sexual healthcare without a wedding certificate, and can be flogged and imprisoned for sexual relations outside marriage, sometimes even when it was not consensual. And where reporting abuses of the government and its officials as a journalist, or simply writing about it online, can result in imprisonment.
The other city I have on my mind is the biblical city of Sodom.
See, in the Torah right now, we are at the end of the generation of Avraham and Sarah. And one of Avraham’s important stories is about two cities, Sodom and Gomorrah, and the Divine plan to destroy them.
Outside the Jewish context, the sin of Sodom tends to be characterised as homosexuality. One must imagine that appeals to countries which seek to oppress their LGBT+ citizens and guests with imprisonment and violence and conversion therapy and forced marriage, like Qatar does.
However, this is not the way the classical rabbis tend to read the story of the city. The problem of Sodom, so say the rabbis, is cruelty and inhospitality. Not simply of the individuals therein, but enshrined in the law itself. Helping the poor was punishable by death. If someone was wounded and came to the courts, they would be told to pay a fee to their attacker for the medicinal benefits of blood-letting. When a guest would enter the city, were he too tall for the size of the standard bed, he would be cut to fit into it. Were he too small for the size of the standard bed, he would be stretched to fit into it.
The society existed for the people to fit into, whether they were born that way or not. It feels familiar, doesn’t it?

In one of the most stark moments of describing the problems of the city, the reason Sodom could not be saved, the rabbis tell us the following in the Talmud (Sandedrin 109b): “There were four judges in Sodom: Shakrai (meaning ‘liar’), and Shakrurai (‘habitual liar’), Zayfai (‘forger’), and Matzlei Dina (‘perverter of justice’). They ruled that in a case of one who strikes the wife of another and causes her to miscarry, they would say to the woman’s husband: give the woman to the one who struck her, so that she will be impregnated again for you.”
What the rabbis are doing in this characterisation of Sodom is this: taking the law of God and twisting it to use for evil. The section of the Book of Exodus that is twisted in the mouths of the judges gives us such lessons as: the death of a slave must be punished; a harmed slave is immediately freed; and that violence that results in miscarriage comes with financial punishment for the attacker. It is a text about protecting vulnerable people and their bodies and enacting justice, and it is used here in Sodom as its opposite: enacting unspeakable harm and injustice upon the vulnerable.
It all feels rather on-the-nose. Sodom is a place of rigidity, refusal to allow individual differences, lack of care for human life, and legal leadership that perverts the concept of justice by twisting the same language as the Law of God.
So what do we do with a city like Sodom?
The biblical story ends with the Divine overturning the city. But it doesn’t begin that way. And since this is Avraham’s last parashah, it is worth, I think, taking a page out of his book.
When Avraham hears that God wishes to destroy this city, for it is so awful and corrupt that even God believes it cannot be saved, Avraham pushes back. Avraham asks: what if there are fifty righteous people within the city? Would You, the Divine, sweep away the innocent along with the guilty? And when the Holy One says that for the sake of fifty, the city will be saved, Avraham asks about forty. Then thirty, twenty, and finally ten. Why? Because חָלִ֣לָה לָּ֔ךְ הֲשֹׁפֵט֙ כׇּל־הָאָ֔רֶץ לֹ֥א יַעֲשֶׂ֖ה מִשְׁפָּֽט - far be it from You! Should not the shofet, judge, of all the earth enact mishpat, justice?
It ultimately does not work. Avraham’s nephew fails to find ten righteous people and the city is destroyed.
Nonetheless, I think that placing the rabbinic narratives of Sodom alongside Avraham’s charge to God paints us an important picture.
When the judges are not just, when the law requires a society to value uniformity over humanity, we should not be putting trust and money into their hands. If we give great amounts of wealth to the judges Shakrai and Shakrurai, who demand a fee be given to an attacker for letting a victim’s blood, we know perfectly well how they are going to use it.

And lest we should dare to think, “well, it’s none of my business” - that too is characterised by the rabbis as the mindset of Sodom. “One who says ‘what’s mine is mine and what’s yours is yours’ is a middling type,” says Pirkei Avot 5:10, which then continues: “And there are those who say: this is the characteristic of Sodom.”
There is no moral option to say ‘it’s not my problem’ while paying the judges of Sodom or the leadership of Qatar, knowing they are using this money to enact violence and slavery and injustice.
But what Avraham teaches us, I think, is that the corruption of leadership should not lead to giving up on the goodness of people within the society. Sodom is a tragic story in which the rot is so deep that there’s nobody righteous left to be found. Qatar is not. There are organisations in Qatar fighting for human rights, there are individuals in prison or at risk of prison, and Avraham would not ignore them, so we should not either.
And, it is worth remembering that the World Cup may be over in a number of weeks, but the human rights abuses of Qatar will not. Qatari women, LGBT+ people, workers, and truth-tellers will still be there long after the footballers and fans leave.
And this is a tale of more than two cities. The struggle with Sodom is not only a historical one, and it is not restricted to Qatar, either. Sodom can return at any place and anywhere. It is my simple hope that we can follow the paths of our father Avraham, to know that innocence must be fought for, even against all odds. And that we can listen to the lessons of the descends of Avraham who have expanded this message: That, like Rabbi Akiva, we can know that the centre of God’s law is one of love: love your neighbour as yourself. And like Queen Esther, we can know that to be comfortable is not an excuse for being complacent. And, like the prophet Amos, we can know that we are obligated to make justice roll down like a mighty stream.
Amos Bible Dvar Torah Hayyei Sara