Habakkuk 3: A Psalm of Many Gods 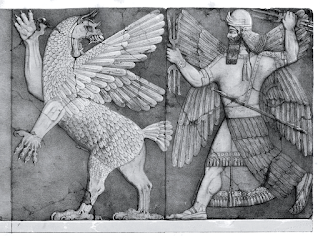 The Psalm of Habakkuk is a song of theophany, and it is filled with undertones of Semitic mythology. These mythological references would have been much clearer to ancient listeners than modern readers. In verse 5, Habakkuk writes: ‘Pestilence marches before Him, and plague comes forth at His heels.’ The ‘plague’ following at God’s heels is ‘reshef’, a name of a Canaanite deity associated with plague. And Reshef is only the beginning.

In verse 8, Habakkuk asks: ‘Is Your anger against Neharim [Rivers], Your rage against Yam [Sea]?’ Water is a common mythological symbol of chaos, and is famously the chaotic matter with which the Divine battles in the first creation narrative of Genesis. This kind of imagery is drawn upon in other areas of the Tanakh, such as Job (see Job 7:12 and 3:8) and in the Psalms (see Psalm 74:12-17). However, like with ‘reshef’, these words would also be heard by ancient readers as the names of the Canaanite sea deities, who represent the great primordial chaos. In the following verse, we see God wielding a bow, followed by a line translated in the JPS as ‘sworn are the rods of the word’. This confused sentence may be the result of a misunderstanding; Eimar (changed here to omer, word) is the weapon with which the god Baal strikes down Yam.

The other figure subtly referenced in our text is Tiamat, the sea goddess of the primordial abyss. In the Babylonian creation myth Enuma Elish, Marduk slays Tiamat and divides her in two to form creation. The term ‘t’hom’, which appears in v.10 (‘the deep sends forth its voice’), is often understood to be related to Tiamat. It most famously appears in Genesis 1:2 as the primordial watery abyss which God divides in two in order to create the universe.

Why is our theophany filled with references to the pantheons of our ancient neighbours? There is perhaps a clue in the choice of Semitic mythological figures being represented here. These figures remind us of stories woven to describe the great battles between the creator gods and the chaos. To the ancient listener, it is possible that the reference to these Semitic mythological figures of primordial chaos would further heighten the sense of power and glory that is depicted in our psalm. Reshef, Naharim, Yam, and Tiamat are reduced here from gods to symbols. Baal and Marduk, understood by our neighbours to be creator gods in their own right, are erased entirely and replaced with the Universal Divine.

Habakkuk sings us to glory at the end of his psalm, turning his phrase from the terrifying God of theophany to the God of personal relationship (3:18): ‘I will rejoice in the Eternal, exalt in the God of my deliverance.’ Masterfully, Habakkuk reminds us that the universal God of creation is also the God of rejoicing and personal hope.