Carrying the Blowtorch (Kashering for Passover) 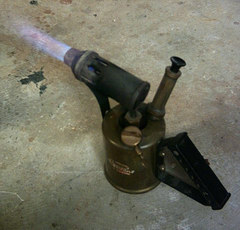 It is a running joke with my Hebrew students that I am not good at translating Hebrew into understandable English on the first attempt. The Hebrew is fine, I like to claim; it’s the English I’m having difficulty with. This is how I find myself explaining to Omar, the head of the industrial kitchens at the American Jewish University: “The way that it swallows it is the way that it throws it back up.”

Omar looks at me blankly. He’s holding a blowtorch in one hand, and has just asked me the very innocent question of whether he can use the blowtorch to kasher everything in the kitchen in preparation for Passover. Omar is very excited about the blowtorch.

“I’m going to try that again,” I say, peering over at my cauldron of nearly-boiling water. It’s taking forever to heat up, but I’m not; between the steaming water on the stovetop, the ovens being turned up to full capacity, and Omar’s blowtorch occasionally firing, the industrial kitchens at the American Jewish University are sweltering. It doesn’t help that it’s April in Los Angeles. “The rule is that the way that the item absorbs the taste of the food is the way that it expels it again. ‘K’volo kakh polto.’ That’s why we put the utensils that cook liquids into the boiling water, and the ones that cook through heat get heated up. The blowtorch is the more extreme version of heating it. That’s only needed for items that cook food directly on fire. It’s actually not that common to need it.”

“But can I use the blowtorch for everything?” Omar asks.

Omar isn’t Jewish, but he’s worked in a kosher kitchen for long enough that I sometimes feel a tad superfluous. I’m the mashgiḥah at the AJU - the supervisor of the kashrut of the kitchens (which is ‘mashgiaḥ’ in the masculine) - but Omar has been working in these kitchens about as long as I’ve existed on God’s green earth. He has a good sense of kashrut, and a good sense of how the rules go together. My job usually consists of checking things: checking food as it comes in, checking that kosher meat packages are still sealed, checking that the cooks are using the correct items in the meaty, milky, and pareve sections of the kitchen. I’m technically here to answer questions, too, but in my many months of working at the AJU, I’ve only had to correct Omar’s intuition once or twice.

It reminds me, in some ways, of classical rabbis who have directed questions about kashrut to their wives. After all, their wives were the ones who actually spent time in the kitchen, and therefore knew the practical halakhah inside and out.

“Technically, yes,” I admit. “Libun gamur - what you’re doing with the blowtorch - it’s the more extreme version of kashering something. So we could use it in place of the boiling water.”

Omar makes the blowtorch light up, which causes us both to smile, and then to look up nervously at the fire detector. We haven’t set it off yet, but we weren’t so lucky last year.

“So why don’t we just blast everything?” Omar asks. “Everything that can be made kosher, I mean?”

I look down at the utensils that are piled up, ready for the boiling water. “You know, this isn’t the normal question people ask,” I admit. “Usually, people want to know what they have to do libun gamur on. It’s the hardest version to do, so they’d want to avoid it.” I lift up one of the utensils. “Do you think this would warp if we blasted it? I think it’d warp.”

Omar looks a little closer. “You might be right,” he says, but he sounds disappointed.

My water looks like it’s going to boil soon. But it has looked like that for a while, and you know what they say about watched pots.

“I can’t believe I’m about to say this,” I state, wiping some of the sweat from my brow. “But I’m going to stand out in the sunshine to cool down.”


I don’t necessarily advise using a blowtorch for everything. Though it’s fun, it also comes at the risk of warping utensils, setting off fire alarms, and burning oneself - all three of which Omar and I did at some point when kashering the AJU industrial kitchens.