While I was in the midst of Elul, my ponderings on the Season of Repentance were interrupted by the very mundane fact that my bank card details were stolen. I found myself leafing through a month’s worth of purchases and marking out what was mine and what was not. And, of course, there were in-between spaces - was it fraud, or do I just not remember? It was an unnerving experience, but it was also oddly intimate. There is some criminal out there who stole from me, and in return, I now know about their taste in clothing and pizza. (For the record: good taste in clothing; bad taste in pizza.)

Of course, this interrupting my thoughts about forgiveness felt in some ways destined - because it forced me to wonder what forgiveness would look like. I cannot forgive this person because I don’t know them, they have not revealed themselves to me - and as much as I know about their preferences of ride-share services, I need a face and a name and an apology to be able to say “I forgive you”. Fraud is a funny old thing.

But fraud is a barrier to teshuvah, to repentance, and to forgiveness.

Perhaps this can help us understand what exactly is occurring in the process of atonement.

I have a prop. 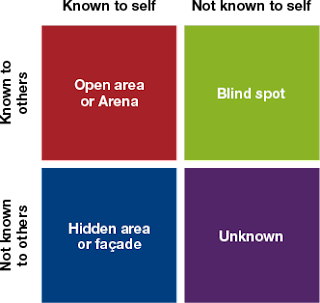 This is what is known as the Johari Window. It’s quite elegant in its simplicity. There are four areas of the self.

The Arena, or the Open Space: This is what is known to you and known to others.

The Facade: This is what is known to you, but not known to others. Secret thoughts and feelings live behind the Facade.

And finally, The Unknown. These are things about yourself that nobody sees. This is the mysterious area.

The beauty of the Johari Window is that things are constantly moving. When I told you that the Blind Spot scares me, that piece of information - my fear - moved from the Facade into the Arena. We can now talk about it openly. When we admit what we are feeling to our loved ones in order to work on them - when we say “that made me sad” or “I am thinking about something from my childhood” or “I wish you wouldn’t”, we move things from the Facade to the Arena. It’s a hugely important part of relationships. And likewise, when we tell people about themselves - perhaps through tokhekhah, through rebuke, or perhaps simply a “did you know that you do this”, we move that information from the Blind Spot into the Arena. Work in relationships takes place in the Arena.

Teshuvah bein adam l’chaveiro, repentance that takes place between people, making up for our wrongdoings against one another - this has to take place in the Arena. There is no room for fraud in interpersonal teshuvah and forgiveness, at least not Jewishly. We require communication, admitting of wrongdoing, and attempting to repair brokenness. The Arena is where this must take place.

Teshuvah bein adam l’makom - repentance between a person and the Divine - is, in some ways, no different. Our tradition says that confession is a significant part of the process of repentance. That is bringing information into the Arena, into the open area between us and God.

But we read in D’varim, in Parashat Nitzavim just a few weeks ago: hanistarot la-Hashem Elokeinu, v’haniglot lanu ul’vaveinu ad olam. Concealed things are for Hashem our God, and overt things, those are for us and for our children to apply this law.

That which is concealed concerns the Creator. Those other areas are interpersonal, but God is different, because God also exists here in the Unknown. So perhaps there is a part of teshuvah between an individual and the Divine that is also about delving into the Unknown.

If that’s the case, wouldn’t it be the ultimate medicine to fraud? Because yes, we can have some control over the Facade - over the things we know but don’t admit - but the Unknown remains unknown to us. That’s the point of it. So how could we possibly do teshuvah with God, if God sees into the Unknown and we do not?

This, I think, is why we confess in the collective.

In Vidui, we say: We have stolen. We have betrayed. We have slandered. By wrapping ourselves up with the entirety of Klal Yisra’el, we find ourselves able to confess to things that aren’t in the Arena or even in the Facade. And tefillah, prayer, is ultimately a self-reflective process. ‘To pray’ in Hebrew is l’hitpalel - you’ll recognise that root in tefillah. L’hitpalel. The root of the word means ‘to judge’ or ‘to assess’ or ‘to intervene’. But the verbal form is fascinating. (If you thought you were getting away without some Hebrew grammar this Yom Kippur - I would apologise, but I’m not really sorry.) L’hitpalel, ‘to pray’, is in the hitpael verbal form, which is reflexive. It means either to do something reciprocal, in this case with God, or to do something to oneself. To inspect oneself, to judge oneself, perhaps. In the words of the great Rabbi Shimshon Rafael Hirsch, it is ‘to examine whether our thinking and aspirations stand up before the eternal truths which are to shape our lives’. Hirsch was writing a hundred years before the description of the Johari Window, but I think what he is saying amounts to: prayer is structured in the reflexive form because, at its best, it is how we reveal things to ourselves from the Unknown Area. To put that in terms of our relationship with the Author of the Universe: if our relationships with people, and our healing in relationships with people, is about moving from the Facade into the Arena - then our relationships with God, and our healing in relationship with God, consists also of moving from the Unknown to the Arena. That is the process of prayer. That is what the quiet space created by fasting, what the beauty of the music, what our work together today is truly about. The Confessional Prayer, Viddui, is especially inundated with this. It is a self-revealing prayer. When we say ‘I have stolen’, we allow ourselves to be open to the fact that our theft might exist there in the Unknown.

The process of atonement is the process of revealing the concealed in order to transform ourselves. It’s about what drama, what words, what music, what physical experiences are going to help us to do the hardest of all things - know ourselves better.

And this is why it doesn’t work to say “I will sin and I will repent, I will sin and I will repent”. The rabbis tell us in the Mishnah that there is no atonement for the person who plans to do the repenting now and return to the transgressions later. And in that same breath, Rabbi Akiva gives us a model for relationship with the Eternal - quoting the Prophet Jeremiah: mikveh Yisra’el Hashem. God is the mikveh of Israel. The purifying waters. Not because there’s some secret stash of holy water that can make us clean, but because ultimately the process of the mikveh is the process of revealing the self. When we go into the mayim chayim - the living waters of the mikveh, we do so bare, hair combed, clean, so that the waters can touch every part of us. And we do so by choice, active participants in the process of self-revelation. If our mikveh in atonement is The One Who Spoke and the Universe Was - if what we are doing today is participating in the process of baring our souls - then yes, it’s a big ask, and a lofty goal. The good news is that we are already here, and we really have nothing else to do today but this holy work.

I wish you all a g’mar tov, a good conclusion to this sacred day. May we find that the work of today changes us and our worlds for the better.