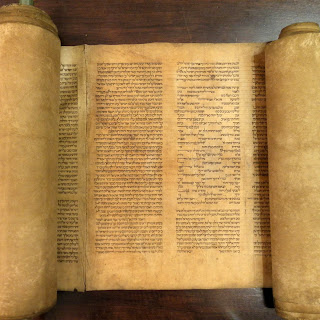 There is a pervasive myth in Jewish tradition that menstruating women cannot touch the Torah scroll. This myth hasn’t appeared out of the blue - this week’s Torah portion is about the interaction between ritual purity/impurity and the ability of an individual to enter into the holy space of the Temple, handle ritual objects associated with the Temple, etc. There is even an obscure medieval text to back it up (though this text actually claims that - as a matter of custom - menstruating women did not enter the synagogue at all). However, it’s soundly rejected in Jewish law, by Yosef Karo (the Shulḥan Arukh), by Maimonides (the Mishneh Torah), and so on.

The main reason that there is no halakhic justification for claiming that menstruating women cannot touch the Torah scroll is that, in a world without the Temple, we are all considered ritually impure (or ‘tamei’). Therefore, any halakhic basis for the myth would naturally result in the inability of any person to interact with a Torah scroll. However, the halakhic truth is even weirder than that: the Torah scroll itself is specifically considered impure.

The below Mishnah describes a disagreement between the Sadducees and the Pharisees regarding the status of the Torah scroll. It is worth noting that the Mishnah sides squarely with the Pharisees (and that rabbinic Judaism sprouted from seeds planted by the Pharisees).
Mishnah Yadayim 4:6:

‘The Sadducees say: “We complain against you, Pharisees, because you say that the Holy Scriptures defile the hands, but the books of Homer [meaning: non-holy books] do not defile the hands!”

Rabban Yoḥanan ben Zakkai said: “Have we nothing against the Pharisees but this? Behold they say that the bones of a donkey are pure, yet the bones of Yoḥanan the high priest are impure!”

They [the Saducees] said to him: “According to the affection for them, so is their impurity - so that nobody should make spoons out of the bones of his father or mother.”

He said to them: “So also are the Holy Scriptures according to the affection for them, so is their uncleanness. The books of Homer which are not precious do not defile the hands.”’

Rabban Yoḥanan’s sarcastic response to the Sadducees forces them to admit that the principle is not that impurity is bad, but rather that we deem things ‘impure’ in order to separate them from regular use, often as a matter of honouring them. The Torah scroll is to be honoured, and therefore should not be handled lightly. As we learn in this week’s Torah portion, the situations in which a person becomes tamei are based on interactions with mortality: birth, death, sickness, etc. It is easy to think of the English terms ‘impure’ and ‘defile’ as implying a certain revulsion, but indeed, the rabbis do not see revulsion in the Torah law. Instead, they see a necessity to separate, which is here based on honour.